The landscapes of the southern French region are characterized by fascinating contrasts. The Provencal nature is characterized by rocky stretches of coastline, as are extensive lavender fields or pink salt basins. We present five varied travel destinations where you can find relaxation in nature. 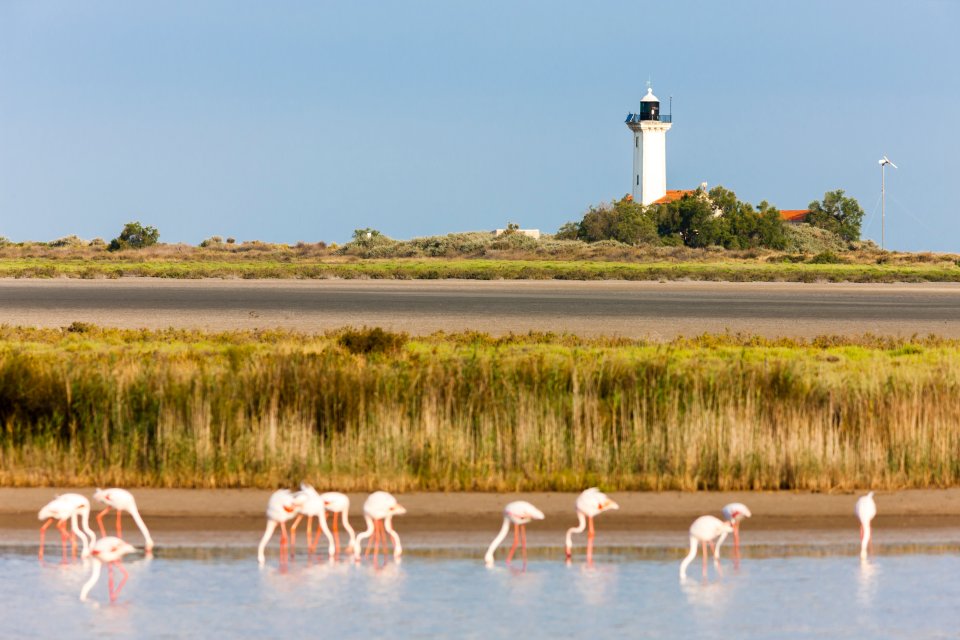 In the west of Provence there is an exciting flat land that can be divided into two areas. The Grande Camargue is bounded by the two arms of the Rhône Delta, while the Little Camargue connects to the west and extends to Aigues-Mortes. The landscape is characterized by swamps, salt and rice fields and pastures. The dry climate, the many hours of sunshine and the constantly blowing mistral provide ideal conditions for mining the precious fleur de sel on the coast of the Camargue. Lookout points, such as near the village of Salin de Giraud, allow panoramic views over the surrounding pink salt pans.

The white horses, some of which are still wild, and the flamingo colonies are symbols of the landscape, but black bulls are also traditionally bred in the Camargue. The coastal area is also a stopping point for migratory birds on their way between Europe and Africa, which is why the area of ​​the Great Camargue in particular has been declared a nature reserve. During a vacation in the region you will surely see some flocks of birds stalking through the shallow waterholes looking for food. Explore the long beaches and wide plains of the Camargue on an exciting horse ride or a relaxing bike ride!

The impressive depression in the limestone massifs of Haute-Provence is probably the best-known attraction of the Verdon Regional Nature Park. The white rock faces of the Verdon Gorge tower up to 700 meters high, which is why the area called? Grand Canyon du Verdon? is called. There are several panoramic routes along the gorge. At the viewpoint Balcons de la Mescla you can marvel at the pristine nature and the confluence of the Verdon and Artuby rivers. An impressive view into the depths can also be thrown from the viewing terrace of Rancouma, but this point can only be reached on foot by hiking.

After the canyon, the over 160 kilometers long Verdon River flows into the Lac de St. Croix reservoir. Rental outlets offer various types of watercraft, from rowing and pedal boats to surfboards and small sailing ships. Since the temperature of the lake averages 24 degrees and there are small beaches on the shore, the Lac de St. Croix invites you to a wonderful bathing experience. But adrenaline junkies will also find numerous opportunities to let off steam in the Verdon Regional Nature Park, such as bungee jumping or paragliding. The white water of the Verdon Gorge can also be conquered with kayaks. In addition to water sports, there are climbing tours on the steep walls of the gorge or hikes through the reserve. Nature lovers get their money’s worth!

Not far from the Verdon Gorge and also part of the Verdon Regional Nature Park is the “Plateau de Valensole”. The French municipality of Valensole gives its name to the surrounding 800 km2 area, which is mainly used for intensive agriculture. The plateau is best known for its extensive lavender fields. In order to be able to experience this in all its glory, you should plan your vacation in Provence between mid-June and the end of August. Every year in July, Valensole hosts the Lavender Festival. In addition to the purple herbs, a lot of grain is grown on the plateau, which creates an enchanting purple-yellow color contrast. In spring, numerous almond trees bloom in beautiful pink and white tones.

Cover a few meters of altitude through the hilly landscape by bike or follow one of the lavender routes by car. Past purple flower carpets and picturesque villages, these streets lead to manufacturers of perfumes and cosmetics as well as distilleries that process lavender into oil. Here you can learn interesting things about the purple plant and find peace and relaxation at the same time as you drive through the lavender-scented landscapes.

The Calanques National Park is a 20-kilometer long, rugged stretch of coast between Marseille and Cassis. Numerous holidaymakers visit the nature reserve every year, and for good reason! Known as a paradise for climbers, the Calanques are also an idyllic hiking region. The limestone cliffs can best be explored from the water or on foot, because the nature reserve is criss-crossed by numerous, well-marked paths. During a hike through the rugged and wild landscape, the view of the turquoise Mediterranean offers a fascinating contrast. Especially the Calanque d’En-Vau with a small bay and pebble beach and the Calanque de Port-Pin, for which the large number of pine trees is characteristic, are among the most popular and probably most beautiful excursion destinations in the national park.

However, plan a visit to the coastal section carefully in advance, because the core area of ​​the park, which also includes sea area, is protected by specific regulations. In the summer months there are also access restrictions for many hiking trails due to the risk of fire. In this way, the unique ecosystem in the rocky limestone should be preserved. Some plant species, for example the “Sabline de Marseille”, and certain animals, such as the horned eagle, are found exclusively in the Calanques in southern France.

The Luberon mountain range is the ideal destination for enthusiastic cyclists, whether beginners or trained athletes. The Lourmarin Gorge divides the elongated ridge into the Great Luberon in the east and the Little Luberon in the west. Due to its animal and plant diversity, the area was placed under special protection as a regional nature park. In addition, UNESCO declared the mountain range as a biosphere reserve. The Luberon Mountains have numerous well-signposted cycle paths with various levels of difficulty. Choose a tour for your active holiday and drive at your own pace on small, pleasant roads, past vineyards and olive groves.

In addition to the impressive landscapes, there are also picturesque villages to be discovered that nestle against the mountain slopes of the Luberon. Five of them, such as Ménerbes and Gordes, are officially among the most beautiful villages in France. Furthermore, the region impresses with its ocher rocks, which shine in intense red tones. There are hikes or bike tours to the ocher quarries in Roussillon and Rustrel.